Merriam-Webster's definition of control is as follows:

2 a: to exercise restraining or directing influence over : regulate b: to have power over : rule c: to reduce the incidence or severity of especially to innocuous levels

It's funny how obsessed the world is with the illusion of control. It's funny how the quest for control can make a person insane. It's also funny how out of control we really are. I can plan for things to happen. I can make sure I have the right supplies for any situation, I can tell everyone in my life what to do, when to do it and why to do it, but inevitably they will do it the way they want to do it.

Tell a four-year old how to brush his teeth and he will insist on using a different toothbrush, putting the toothpaste on himself and most likely he will go to a different bathroom to get away from me. It's maddening!

Prepare yourself for the daily occurrences in life and unexpected things will always happen.

As I hosted Thanksgiving dinner this year I was very conscious of every one's need for a taste of control, I was okay with it. The saying "too many cooks in the kitchen", I'm not so sure. I made the turkey and stuffing, others brought a dish or two of their liking and poof!, a beautiful feast was created by everyone in attendance. I am thankful for my ability to give up control of everything.

I've been letting go of my desperate need to control my life. I realize that it's a symptom of a greater need, to feel safe and sane. Fear does funny things to a person's character, but that's an entirely different topic.

Dermot has been waking up in the wee hours of the morning crying like crazy. It's the same time every night. We pick him up, bring him downstairs, wrap him in his favorite soft blanket and hold him for as long as it takes for him to fall asleep again. We don't know why he does this, all I know if that if I hold him tight he'll stop crying. He's changing again, it scares me. My challenge is to not have my fear turn me into a control freak again.

I have a prayer that a good friend shared with me.
I read it everyday at least once:

GOOD MORNING,
THIS IS GOD.
I WILL BE HANDLING ALL
YOUR PROBLEMS TODAY.
I WILL NOT NEED
YOUR HELP SO
HAVE A GOOD DAY.
Posted by Suzanne Sullivan at 10:07 PM 2 comments:

How's the diet going? It's going pretty smoothly in the last few weeks. Dermot's partial onset seizures are gone, now we are just fighting with the Tonic seizures. He still has around twenty of those a day. If you didn't know what to look for you wouldn't notice his seizures. His left arm goes straight up, his eyes look up and his body tenses for a few seconds, then he just resumes what he's doing. The brain is an big fat mystery! Dermot's neurologist wants to try just the diet for another month, then he might want to try a different drug for the tonic seizures. I'm not for that. Apparently the most common side effect for the new medication is sleeplessness. No thank you! We've had enough of that in the last 2-1/2 years.

We discovered what meals Dermot will eat and have decided to sick to them. Here's a sample of what Dermot eats each day:

Sound good?
Posted by Suzanne Sullivan at 3:32 PM No comments:

Ryan's sitting up all by himself, I'm so proud! I was going to go into some long essay about how important milestones are and how easily they come to most babies, but I won't. I'm just happy with my little Ryan today!
Posted by Suzanne Sullivan at 10:46 PM 2 comments: 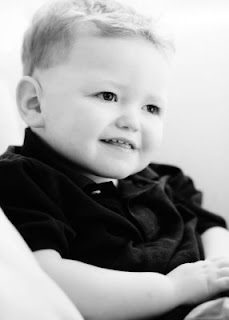 So, here's something I've noticed and it's a big fear of mine. I fear that Dermot's becoming invisible. Not really, but to the outside world, to the "nice" people we meet or already know. To friends and even some family members, it seems as though he's not there. The polite look and then quick look away, the attention that gets showered to Owen and Ryan is not the same for Dermot.

Why is that, I wonder. I don't really wonder. I've been there myself. I was the one who shyed away from anyone different. Not on purpose, just out of fear. Not knowing how to treat a child or what to say, do I touch him? Can they hear me? Can they see me? I'll just pretend they're invisible.

We've gone to several outings, the country club, Target, the Children's Museum and so on. I've started to notice.

So, I want to tell you about Dermot.

Dermot is a beautiful boy. He smiles, he laughs, he screams with delight. He has more grunts and moans than most babies have, and I can understand most of them. He shakes his head no when he's all done with something, he calls out for attention when he wants to play, and he whines when he's sleepy or sick. Dermot thrives off of human interaction. He loves being talked to. We're not sure what he can see because of his vision impairment, but the moment you come down to his level and say hello, he knows you're there. He doesn't have sensory issues, so grab his hand when you say hello. He loves when our house is at it's most chaotic. He loves listening to the dogs wrestling and barking, he giggles when Ryan is crying close by and loves when big brother Owen screeches and howls for him.

He's not mobile, he can't sit up on his own or crawl. He hangs out in "big Blue" a Tumble Form chair or on the floor or in his stander (3 x's a day). Or the "stroller" when we're out and about. He can't walk up to you and get your attention, he needs you to come to him, he needs you to say hello. I need you to say hello. He's my son and I love him with all that I am, he's your grandson, your cousin, your nephew, he's not invisible.
Posted by Suzanne Sullivan at 10:10 PM 5 comments: