What a year it's been, each month giving us new challenges, new joys and new heartaches.

January: 5 months pregnant, I jetted off to visit my brother in LA for the weekend, only to return and rushing to the hospital to be with Dermot as he suffered an awlful bout of RSV and pneumonia. Six nights later he came home, I swear he's different. No longer able to suck his thumb and drink efficiently out of a bottle, Dermot left something at Children's Hospital that I wish we could have back.

April: Owen turns four! Just days before I'm to deliver #3, we had a glorious time at his party. All his friends and classmates joined him at Pump it Up! Yipee!

May: Ryan Joseph Sullivan joins our family after a day and a half of labor, one push is all it took! What a blessing! So begins the battle for sleep.

August: Countless visits to and from family! Ryan had his first airplane ride at three months, thanks to uncle Bill! Ryan sleeps thru the night for the first time!

September: Owen starts pre-k, quickly makes friends with lots of great kids. Dermot gets admitted to begin the Ketogenic Diet. It's not as smooth as we'd hoped, but by the end of the month he's found a groove...

October: Trick or Treat! Owen speeds thru the neighborhood as a NASCAR driver, cleans up with a full pumpkin of candy, which I make him share with me!

November: I hosted Thanksgiving, with a little help from everyone. That was my favorite holiday!

December: Christmas has come and gone, plans changed at the last minute and most everyone celebrated with us in Minneapolis. What a blessing that turned out to be! Cousins were here to play with my boys, sledding and ice skating, it was a great time.

I have to say, I'm especially grateful for the outpouring of help and concern from our friends and family. It's touched me in ways I won't ever be able to tell you personally. I have made some connections with some fantastic ladies this year, from my Wednesday Group, my parent support group and my parenting class. I'm glad to know all of you!

As we approach 2009, there are a lot of unanswered questions regarding Dermot's condition. We are waiting for more test results from Mayo late this month. We are due for a round of appointments this month. The neurologist and the phyisatrist. Dermot also starts a transition class at Edina special ed one day a week. Plus for the next eight weeks he'll be getting hyperbaric oxygen treatments everyday for and hour each time.

I'll update these as they occur. Until then, thank you for being in our lives and have a happy and healthy new year!
Posted by Suzanne Sullivan at 10:51 PM 1 comment:

© Copyright 2000 Lori Hickman. Originally published as the dedication to Living in My Skin, The Insider's View of Life With a Special Needs Child by Lori Hickman. Reprinted with permission of the author, all rights reserved.
Posted by Suzanne Sullivan at 2:56 PM No comments: 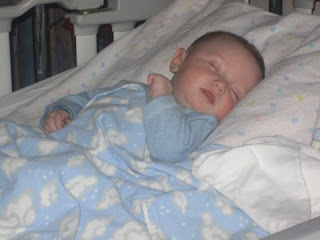 How did we get here? It was November 17th, 2006. Joe had left earlier that day for his annual hunting trip out to South Dakota. My brother had just arrived to drive up to my mom's place in McGregor, MN with me. I wanted a little help since I'd be with Owen who was 2-1/2 and Dermot who was almost four months.

The car was packed, I was trying to calm Dermot down. He was trying to recover from a cold and was crying hard, something he did quite a bit in his first few months of life due to a case of reflux and pyloric stenosis(google it). I was struggling to get him to stop crying, and then, he stopped instantly. Whew, I thought. I set him down in the bouncy chair and finished putting everything in the car. I came back and looked over at Dermot and he was still in the exact position he was in before, I thought that was a bit odd so I went over to him. His eyes were fixed to the left side and he was pulsing his left hand and foot ever so slightly. I thought that was strange so I called the doctor's office and told them what Dermot was doing, she told me a nurse would call me back...in the meantime, I asked my brother to come look at him, we brought him upstairs to his room, I undressed him and noticed his back muscles on the left side were very tense. I was really worried now, 10 minutes had gone by, I called the doctor's office and told them I was bringing him in.

I got him in immediately. Dr. Cantor looked at him for a second and asked if his staff had told me to bring him here. I said I was waiting for a phone call back. He told me that Dermot was having a seizure and that an ambulance was on it's way to take him to Children's Hospital. They scrambled to find oxygen and some Diastat (rectal Valium) to stop the seizure. They were out of the Diastat. All the while I managed to stay pretty calm. It hadn't sunk in yet.

The EMT's arrived, they literally grabbed Dermot and ran him out to the ambulance, half dressed on Hennepin Avenue on a cold November day. I followed behind and buckled myself in beside him in the ambulance. The lights and sirens were blaring. It was starting to sink in.

We arrived at the emergency room, they wheeled him away to a trauma room and started to work on him. They stripped his clothes off, administered Atavan and another mediation to try a stop the seizure then they intabated him. It was like an episode of ER. I was told to stand back, as I listened to some of the ER nurses joke about the "fish lips" they gave him with the tape that held the tube in his mouth. I remember reminding them that he was my child and that I could hear them. They stopped laughing.

There were about 15 different medical professionals working on Dermot, I was sitting in the corner, alone, holding Dermot's onesie. It sunk in. I needed someone. Joe was out of cell phone range, all his friends were in South Dakota already, except one. I called and got a hold of Alan. He said he'd try his best to find him. In the meantime, I called my dad to be with me, to hold me up.

The seizure lasted for over 2-1/2 hours.

They'd managed to stop the seizure with medication, but they had to intibate him because the meds didn't allow to breathe on his own. After an MRI and a CAT Scan he was sent to PICU. I remember passing my friend Shannon, who works as a nurse in the PICU, I was comforted by her face. They did a spinal tap and then left him to be monitored.

Joe finally got word about what had happened and was racing back to Minneapolis. He was four hours away.

Dermot was in the PICU for 24 hours and the regular ward for another two days, he had an EEG and it was inconclusive. The doctor decided is was a febrile seizure because he was getting over a cold (although he wasn't running a temperature).

We went home three days later. As far as we new, Dermot was okay. He was put of Dilantin as a precautionary measure. All was good for about a month...

Right before Christmas time I had started to notice a little facial tick in Dermot. I called the doctor, he told me to up the dose of Dilantin and call me after the weekend. No change, the doctor still hasn't called be back...

We were referred to another neurologist, as the facial tick was getting more noticeable. He scheduled us for a 24 hour video EEG. It was in early January 2006. We waited and the day came to bring Dermot to the pediatric epilepsy ward at St. Paul Children's. I remember feeling terrified by what I saw. At least five or six kids with helmets on and wired up to monitors all sitting in the main area. I was not prepared for any of this. I wanted out. My baby wasn't like these poor kids.

They applied 20+ probes to Dermot's head (all the while, he's screaming). They use this really smelly glue and have this loud dryer to make sure the probes don't fall off. Then we wait, they record his brain activity for 24 hours.

The next morning Dr. Ritter arrives in the ward and we wait to see him. We waited a good four hours...he asked us to come into his office with his assistant. The nurses will hold Dermot for us. He told us the Dermot's brain activity was abnormal. (It hadn't sunk in yet...) We asked questions, I don't remember what they were. I remember Joe asking what the worst case scenario would be for Dermot, he said Dermot would be wheel-chair bound for the rest of his life. Joe lost it, I felt something come over me to hold my composure. I asked a few more questions, I don't remember what they were...our 7-month old son, wasn't going to be like everyone else. (It still hadn't sunk in) I didn't cry, I was numb...it would be months before I could feel the grief.

Since that day, the day my life changed forever, we've had countless tests and seen countless specialists. We went to the Mayo Clinic. We have yet to receive a diagnosis for Dermot. He has epilepsy, but all that means is that he's had more than one seizure in his life and he has global developmental delays.

We are returning to the Mayo Clinic this coming Wednesday for a follow-up visit. The doctor will decide if he qualifies for any additional tests because his symptoms have changed since she last saw him 18 months ago.

To be continued...
Posted by Suzanne Sullivan at 9:32 PM 3 comments: