One of many memorable quotes from Finding Nemo. This one sticks with me. Peach the starfish lives in a tank, she's stuck there. She watches the comings and goings of all the people in the dentist's office. When the dentist's niece, Darla, walks in and slams the door she yells "Find a happy place!" over and over.

I recently found a new happy place. For years mine was at the end of the dock at my mom's lake house, laying in the sun while her german shepherd plopped her chin on my chaise lounge beside me. This place makes me feels warm and calm. But it also made me remember being free to be wherever I wanted to be. No kids or husband and I still had a decent enough figure to rock my daisy-print bikini.

I'd drift off to my happy place while trying to meditate at the end of a yoga class or if I was struggling to get to sleep. Now, I found a new happy place.

I was blessed with the privilege of going away on a girls weekend last week. Something I've NEVER done. My friends and I agreed on this "experiential spa" in Austin Texas. I picked it because it had horses. The spa treatments and warm weather were an added plus. It had horses, and with the horses came REAL cowboys. Not kidding. Spurs that jingle and jingled, Stetson hats worn perfectly straight and  a Texas knowhow of all things equine.

I was sure to schedule a trail ride a few weeks in advance and insisted that my friends join me on the ride. Cowboy Matt drove us down to the stable where we met the horses we would ride. Mine was Hydro. A cross between an english draft horse and a quarter horse. 1500 lbs. of horse! He was quiet and kind, except, when he bit the horse in front of him to tell him to hurry up. After the ride I was stroking his mane and scratching his ears. He seemed to relax into a series of yawns and stretches. Cowboy Matt told me Hydro liked me...that was a good sign.

The next day I was to have my equine encounter. Not a trial ride this time. This was like a date with a horse. Get to know him, see what he's like, how far you could get with him...Turns out I after a last minute cancellation, I was the only guest registered for this experience. It was me, Hydro and a couple of cowboys teaching me about horses.

We went out to the pasture where the horses were eating, led a saddleless Hydro to the hitching post. The cowboy handed me a brush and I began to groom my new friend. Careful to brush with the grain, I brushed all the dust and dirt I could off of him. I talked to him as I brushed him. I looked into his enormous brown eyes. After the brushing I lead him to the ring and watched the younger cowboy as he demonstrated what I would be doing next. He showed me the orange stick with the tiny flag on the end of it. He informed me where I was going to stand. How my posture would be. He told me confidence was the key. If I was confident, he said, Hydro would listen to me. My turn now.

So excited to be in the ring, I focused on Hydro's eyes, I wanted him to like me. The cowboy kept reminding me to watch his tail, not his eyes. Walk with my head high, and full of purpose. He asked me to have Hydro turn the other direction. I asked, he complied. Then I realized the cowboy had left the ring. It was just me and Hydro. Me and my 1500 pound friend. I asked him to walk faster, he trotted gracefully around the ring. I asked him to slow down, he slowed. Then, after a few more times of fast and slow, the cowboy told me to drop the orange stick and walk to the center of the ring. "Keep your back to Hydro", he demanded. "Ignore him", As I was trying not to pay attention to this beautiful creature, he slowly walked towards me and nudged his nose to my shoulder.

That was it, this was my new happy place. This powerful creature became my friend. Trust and confidence brought him to my shoulder. Kindness and a scratch under his chin kept him by my side.

After sharing a few stories with the cowboys about wildlife encounters and a hilarious story about a donkey, I returned to the spa. Feeling blessed and calm.

I'm a week past my weekend away and my high is diminishing. Dermot has the mucus once again. I was feeling a bit like Peach today. Trapped in the fish bowl watching the people walk by on a beautiful day. Suctioning Dermot every few minutes, I was feeling defeated by reality. But my saving grace is that Hydro is real.. And I have a Happy Place to go back to whenever I'm trapped in the fishbowl. 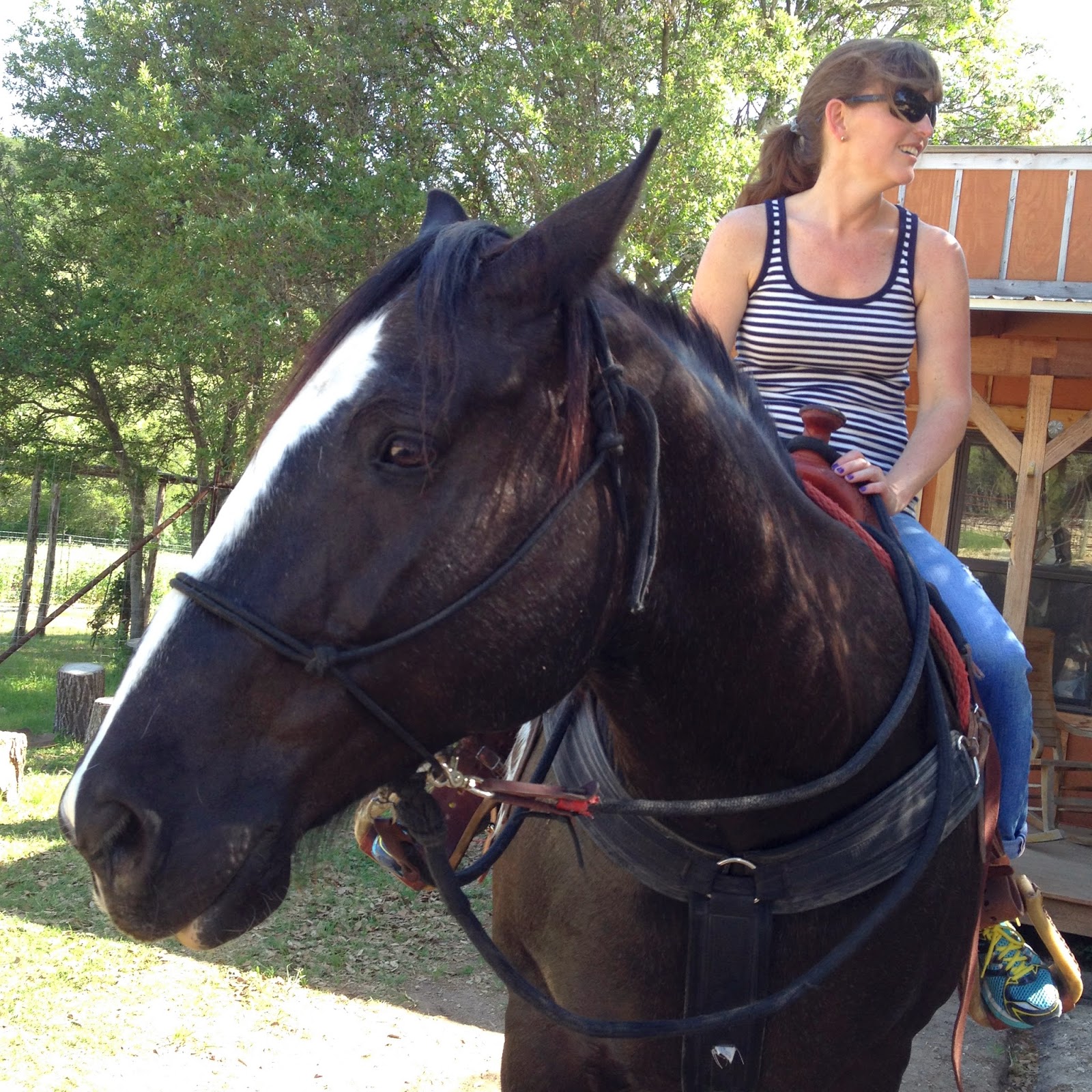 Posted by Suzanne Sullivan at 11:42 PM No comments: