Then, I slept on it. I realized that everyone faces their own reality, everyday. For some people, a smart phone purchase IS a big deal. Some people AREN'T conditioned to take three kids to the zoo. Some people NEED to believe my life will be easier in a few years. And to some people being alone is the SCARIEST thing they can imagine.

I think back to when Owen was two years old. My friend's two year old son was diagnosed with a serious neurological disorder that has potential for brain tumors, blindness and other REALLY scary conditions. I saw this friend about twice a week for at least a year and a half. When I heard about her son, I did nothing. I didn't call, I didn't tell her how sorry I was, I didn't bring her dinner, I did nothing. My reality, back then, didn't equip me with any compassion for others. I never in a million years thought anything like that could happen to my child or my family. So I did nothing. For that I am truly sorry. For that I can have compassion for others, even if they don't know the right thing to say to me, or the best advice to give. the point is they tried, they wanted to be of service in some small way.

Today I don't have to be angry.

Today I have to say thank you.
Posted by Suzanne Sullivan at 2:29 PM 1 comment: 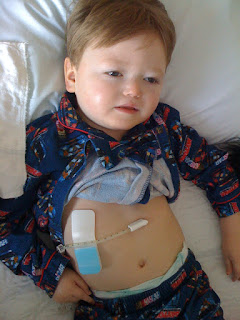 Dermot's surgery went well. Mom and dad have been learning all day how to use the tube and feed Dermot. He's been a champ through the whole process. Let's hope it's all worth it and that it will ultimately make him more comfortable.
Thanks to all for your kind words and prayers. I feel truly blessed to have such great friends and family.
Posted by Suzanne Sullivan at 9:00 PM 1 comment: